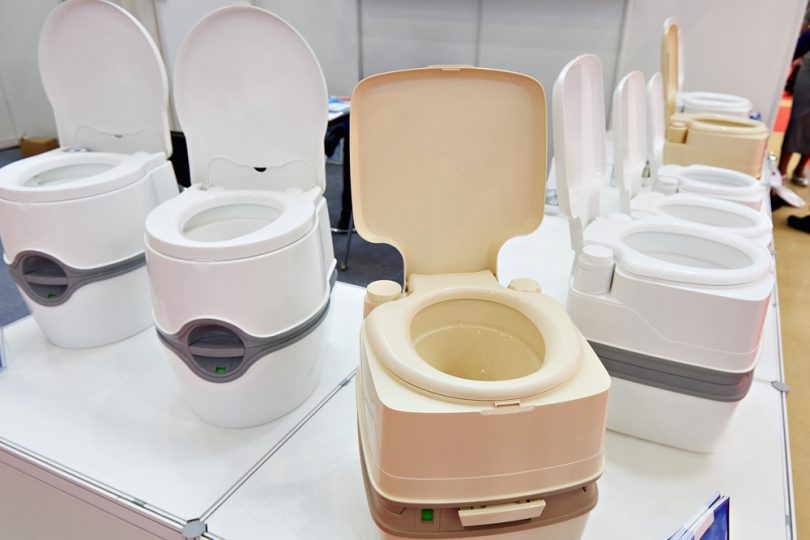 Many people are concerned about the negative impact that regular flushing toilets cause on the environment. Excessive water consumption and pollution of water bodies has encouraged many to consider other alternatives to treat human waste.

Self contained composting toilets are among these new alternatives to reduce the generated impact. These toilets don’t require tubing or water service and take advantage of natural decomposition processes to convert human waste into compost.

Many people have doubts about implementing these green systems in their homes due to their bad smell. However, getting rid of this foul smell is really easy, but first, you’ll have to know why and where the smell is generated.

This article is dedicated to finding the answer to the question: why does a composting toilet smell? We’ll also share some pro tips on how you can eliminate the foul scent before it pollutes the surrounding environment. Without any further ado, let’s begin.

Why Does a Composting Toilet Smell?

Without a venting system, bad odors from urine and feces will escape through the toilet and will permeate every single corner of your home. The simplest venting system consists of a fan connected directly to the tank. The fan sucks the gases inside the tank and expels them through a ventilation pipe.

All composting toilets take advantage of the natural composting process to control bad odors. During this process, anaerobic bacteria in the presence of oxygen break down the waste into compost.

If the present bacteria aren’t enough to degrade all waste, bad odors could escape from the tank. Therefore, it isn’t recommended to pour chemicals into the tank that could kill bacteria and interrupt the composting process.

Most composting toilets have a holding tank just below the bowl. With this configuration, bad odors may escape every time you open the lid. However, more advanced models include separate holding tanks located at a safe distance from the toilet to prevent the escape of bad odors.

However, all modern composting toilets currently sold in the market have sealed holding tanks, so there’s no reason to worry about bad odors.

There are a wide variety of organic and chemical products on the market to control odors from a portable composting toilet. For example, there are natural treatments that add more bacteria and enzymes to the holding tank to speed up the decomposition of human waste.

As said before, adding chemical products that can kill bacteria inside the holding tank will only worsen the bad odor problem. So, things like chlorine, disinfectants, sodium hydroxide or ammonia aren’t a choice.

To completely eliminate bad odors, all human waste should be transformed into compost. When this happens, organic matter acquires an earthy smell, pretty similar to wet soil. This final product can be used as fertilizer without risk of contaminating crops or nearby water bodies.

Most of the time, the sole action of anaerobic bacteria isn’t enough to control bad odors. Therefore, it’s important that the toilet also has an adequate ventilation system to suck the gases from the holding tank and expel them into the air.

Certainly, composting toilets are an eco-friendly alternative to common toilets. Also, they don’t need to be connected to the water supply or the local sewer system to work. So, you can take them with you on your outdoor trips if going into the woods isn’t an option for you.

Best of all, composting toilets turn human feces and urine into beneficial products that nourish the soil and don’t contaminate water bodies. So, if you’re worried about the terrible impact that humans have caused on the planet, make the change and start using composting toilets.

Hopefully, by now, you have a pretty good idea of what causes the smell, and how you can get rid of it. We tried to answer the question “why does a composting toilet smell” so that more and more people know the truth. If you’ve found the answer to your question and liked the post, please share it with those who might need to know.

Q. 1: Can you pee in a composting toilet?

A. Yes. You can pee in a composting toilet without problems. When urine evaporates, water vapor escapes through the ventilation system, and solid waste remains inside the holding tank. These residues are then degraded by anaerobic bacteria as well as human feces.

Q. 2: Can you use toilet paper with a composting toilet?

A. Yes. Toilet paper is biodegradable and can be turned into compost by bacteria action. However, it isn’t recommended to throw inorganic waste into the holding tank because it won’t degrade.

A. Yes. Compost bins have a strong odor. However, if all organic waste has been degraded into compost, the resulting odor isn’t so unpleasant.

Q. 4: What is the minimum price of a composting toilet?

A. Usually, the minimum price for an average composting toilet is $900. However, you can find more advanced models with prices above $2000.

Q. 5: Do you need a permit for using composting toilets?

A. No. Since composting toilets don’t imply an imminent risk to the environment, you don’t require a special permit to install them at home. In case of any doubt, check out your local laws.