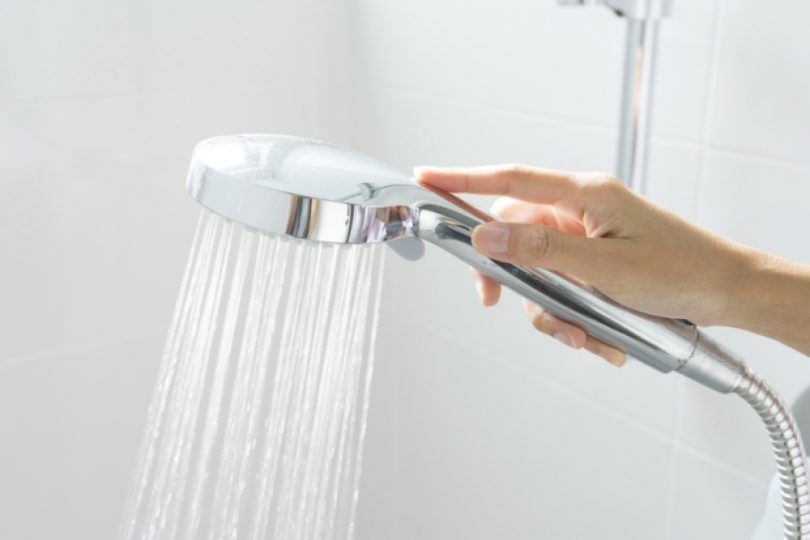 While most shower heads use two knobs to control water flow, some use three. But why? If you’ve ever wondered what that extra knob in the middle is for, we’ll give you the answer here.

In this article, you’ll learn all the different ways of how to turn on a handheld shower head.

Handheld Shower Heads Guide : What is it?

A handheld shower head is a gadget commonly used to focus a water string on certain areas of the body. Handheld shower heads are connected to the shower arm through a flexible hose. This hose is usually made of plastic, brass or stainless steel.

Stainless steel is by far the best material of all due to its high resistance to rust and high impacts. Some handheld shower heads let you change the shape of the water spray at your convenience. Each spray pattern has different therapeutic effects on the body.

More advanced models have a filtering system inside the shower head. Water passes through a series of layers that remove impurities and pathogens from the water. Some water filters also ionize water and add vitamins and minerals.

How to Turn on Handheld Shower Head?

Single handle faucets use a single handle to control the flow of cold and hot water. To use them, just turn the handle clockwise or counterclockwise. They’re practical and easy to install. However, they aren’t the best for controlling the temperature of the water.

Double handle faucets are the most common of all. They let you better control the temperature, by mixing cold and hot water at different proportions. Usually, the left handle controls hot water, while the right handle controls cold water.

They’re very common in bathrooms where the bathtub also works as a shower. The handles at each end control the flow of cold and hot water. Meanwhile, the handle in the middle works as a diverter.

A diverter is a device that deviates shower water to different outputs.

These devices use knobs to control the water flow that gets out the shower head. These knobs are usually made of clear acrylic. This material is non-toxic and is resistant to high temperatures and friction.

However, some more expensive models use stainless steel for superior resistance to high impact and friction.

These faucets use a pair of cross-shaped handles to control water flow. The shape of these handles allows a better grip and improves the aesthetics of the bathroom. Cross handle faucets are usually made of metal and plastic.

Metal models are available in different finishes, such as chrome and oil rubbed.

Why & How to Repair a Shower Diverter?

If the water escapes from the two outputs of the diverter, something wrong is happening. There are three main reasons why diverters stop working right. Below, you’ll find a detailed explanation of each one.

Some tub spouts have a metal lever that works as a diverter. You only need to pull or push the lever to change the direction of the flow. Rust and limescale tend to build up inside the tub spout, preventing the diverter from shutting off the water flow in one direction. When this happens, water escapes from both outputs.

To solve this problem, you’ll have to uninstall the spout and then soak it in vinegar overnight. The vinegar will help soften the accumulated residues.

Diverters use a rubber washer to seal the water passage. However, over time, the washer tends to wear, bend or break. In these cases, it’s better to buy a new diverter or hire a professional to change the washer.

This frequently happens in metal pipes. The threaded connection that joins the water pipe with the diverter valve tends to accumulate too much rust. When the rust inside the pipe is too much, the water pressure at the connection point increases dramatically.

Over time, pressure tends to break the connection, causing serious water leaks behind walls. When this happens, bad odors and mold spots start to appear.

1. Why do handheld shower heads leak?

Ans. Handheld shower heads leak when there’s an ineffective connection between them and the flexible hose. Faulty head gaskets are another reason for a leak. The leaking area usually points to the source of the problem and takes a few minutes to repair.

2. Can I add a handheld shower to an existing shower head?

3. How to install a handheld shower without drilling the shower membrane?

Ans. You can screw a handheld shower onto the existing shower head using an adjustable wrench. The whole process takes only about 10 minutes.

4. Does a shower holder fit all shower heads?

Ans. Shower heads are made in different sizes and shapes with distinctive designs. Slide rail is a great option to keep your universal shower head stress-free. The variation in designs and styles often makes shower head replacement a difficult job.

5. How do I clean a handheld shower head?

As you can see, there are many different ways to turn on a handheld shower head. However, they all follow the same basic principle. You will find different types of valves on the market that adapt well to the configuration of different types of showers.

So, before installing a new faucet or diverter valve in your bathroom, you should first know how many water inputs and outputs you have. Also, make sure the color, material and design of your new valve matches your bathroom décor.