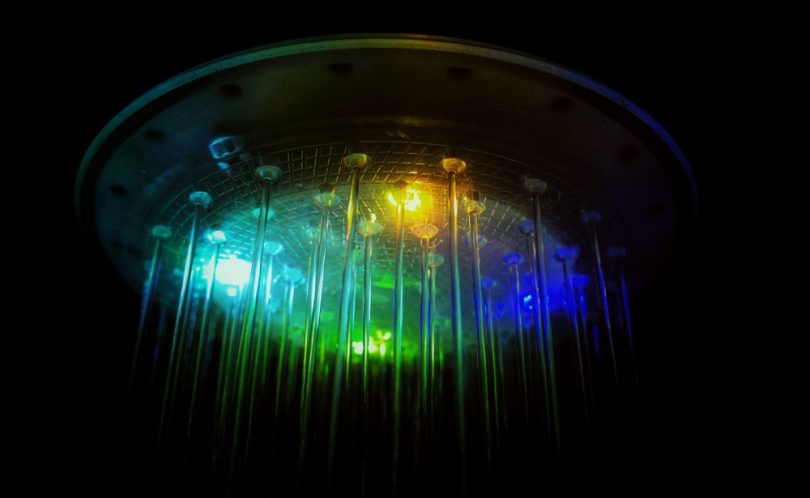 We usually take a shower at least once a day. Certainly, after taking so many showers in your life, the experience becomes a bit boring.

If you’re also having trouble enjoying your daily showers, you have to do something immediately. Installing a new LED shower head in your bathroom will turn each shower into a magical experience.

These amazing gadgets fill your bathroom with color. To use them, you just need to turn off the lights, turn the water on and enjoy the show. Certainly, after installing the first LED shower at home, your family members will want to spend the whole day in the shower.

If you’ve never heard about LED shower heads and want to know more about them, you’re in the right place. Today you’ll learn how does an LED shower head work and all the different types currently available on the market.

What is an LED Shower Head?

LED shower heads have the same main function that the rest of shower heads. They transform a water string into a soft rain-like a rain shower head. In addition, they help improve pressure and decrease water consumption.

However, LED shower heads have a special feature that the rest don’t. They use LED lights to color the water. Colors can help you feel relaxed and improve your mood. In addition, they set the ideal atmosphere for a romantic shower.

Most LED shower heads offer a wide variety of colors. Some models let you choose between a random color sequence and a specific color. Each different color has a certain effect on your mood.

While darker colors help relieve stress, brighter colors give you energy. On the Internet, you can find a more detailed explanation of the effects of colors on health.

LED lights don’t consume much energy and are friendly to the environment. Also, using them regularly doesn’t implicate a health risk. Although they’re more expensive than regular shower heads, you don’t need to invest a lot of money to have one. Usually, the average price of an LED shower head is $15-$40.

This option is controlled by changes in temperature. For example, if the water is cold, the shower displays a blue light. On the other hand, if the water is hot, the light is red. A small electronic circuit incorporated in the shower head controls the color variation.

This option is very useful for those users who hate getting into the shower when the water is still cold. In addition, it’s a practical and safe way to know the temperature of the water.

These models display a random color sequence while you shower. It’s especially entertaining for children and helps them enjoy the showering time. Usually, the gallery of colors that these gadgets display includes purple, blue, green, red, yellow, and orange.

Some models also display a white light that works as an additional light source for your bathroom. Usually, these shower heads let you vary between a random color sequence and a single color.

This is the simplest and cheapest option of all. It only displays a white light to illuminate the shower while you use it. However, you can also turn off the LED light when you don’t need it.

How Do LED Shower Heads Work?

LED shower heads need no battery to function. In fact, these devices are water powered. They operate the same way as hydroelectric plants.

The water string spins a wheel connected to a dynamo. The dynamo transforms the movement into a small electric current. The generated current isn’t so high to be dangerous, but it’s enough to turn on the lights.

In these cases, it isn’t recommended to use batteries, because the humidity of the shower would generate corrosion. As a result, the battery would discharge too quickly.

LED shower heads help you reduce water consumption and save money every month. In addition, they’re available in a wide variety of designs and prices. Best of all, they’re durable, easy to install, and don’t require frequent maintenance.

Without a doubt, LED shower heads take a common shower to the next level. In addition, they help improve the aesthetics and lighting of your bathroom. So, don’t wait any longer and choose a model that better blends with your home decor. Certainly, each shower you take will be a magical and unforgettable experience.

Ans: No. Shower heads aren’t dangerous because the electric current they use isn’t enough to cause electrocution. In addition, they’re friendly to the environment, because they help reduce the water and energy consumption.