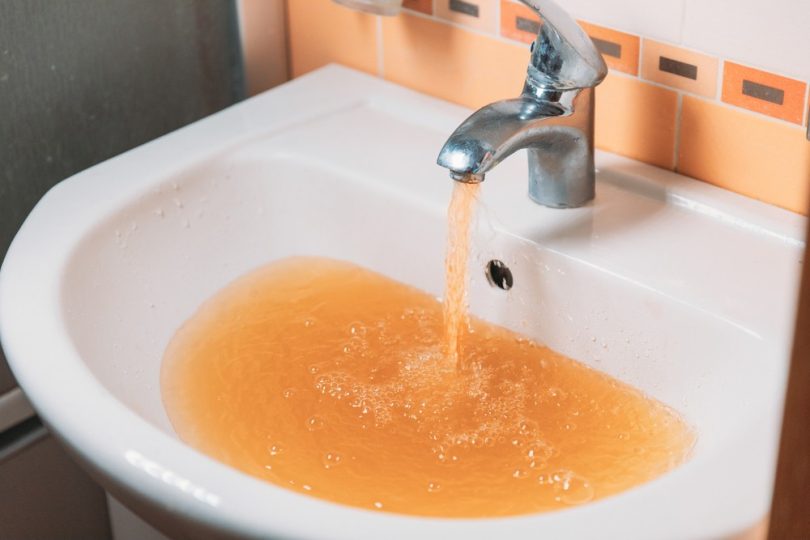 It happens. Your water has a brown, red, or yellowish hue to it – rust! The appearance of this usually means that there are minerals or sediment like iron or manganese in it. But how do you fix rusty water when it does?

Let’s explore the reasons, signs, and how to fix rusty water.

Why Do You Have Rust in My Water?

It isn’t pretty if you have rust in your water, but there’s no reason to panic. Rust can sometimes come loose from the inner walls of your pipes and into your water supply.

Other factors include a water main break, repairs, change of pressure, and water heater problems.

The taste of rust in your water has a tangy or metallic flavor.

If you see discoloration in your water, usually red, yellow, or brown, you know you have rust in your water supply.

Inspecting your ceramic or porcelain sinks and tubs for discoloration is another way you know rust is entering your water.

Flushing the pipes – the simplest and first way you should try to fix the rust in your water. Turn on as many taps in your house, running cold water for about 20 minutes at the highest pressure it can go.

This usually clears the pipes of rust, but if it doesn’t, wait about half an hour and try the flushing process again.

Some rust from your pipes is usual; however, if there is a considerable amount where the pipes are corroding or deteriorating, you might have to consider replacing them. A professional is needed for such a big home improvement project in severe cases like this.

Sometimes water comes from your property’s well, not the pipes. If you use a water softener, it adds salt to your water well. Doing this will get rid of rust and other things that are difficult to clear away through filtration.

If you’ve added water softener to your well or the whole house, the next step is adding a mechanical (or iron) water filter. This device filters out the rust particles from your water supply by attracting and trapping them so they won’t enter your fixtures and pipes.

Just know that the filters take cartridges that need replacing every 3 to 6 months.

If you’ve already added a water softener, it sometimes helps if you add a rust remover enhancement product. They are a fast and economical way to combat rust. A lot of the time, it only takes a couple of hours to remove the rust buildup.

Make sure to read the directions carefully because if done incorrectly, the rust can solidify after it’s dissolved.

The most successful but costly option to get rid of rust in your water is using a hydrogen peroxide system. It also gets rid of hydrogen sulfide gas which can damage things.

The hydrogen peroxide system works over a multitude of pH levels. It’s better than using just a chlorine system, but it comes with a higher price.

Some people use water filters to remove rust from the water because they can get rid of heavy metals. The problem is that it might remove the rust but can clog up your filter. This is not the ideal solution and other ways are much better to eliminate rust.

You can try draining and flushing your water heater tank through the drain valve. If it has rust or bacteria, shock it with chlorine and follow it up with the flushing.

Numerous water heaters have a glass lining that protects their metal parts from rusting. Over time, the coating might break, so fitting the heater with anode rods is a sound, second defense system. It will attract corrosive things from the water.

Add phosphates to your water supply through a solution feeder. Polyphosphates have phosphorus which goes into the water. Iron doesn’t form rust that way. Only use this option if your rust problem is severe. It’s also a more significant price tag associated with this method than other options.

Adding bleach? I know, it sounds strange. But, if rust is caused by bacteria, this is a very effective way to remove it.

Pour a half-gallon of bleach into your water supply and let it sit for 12 hours or so. After that, run the water for a while to ensure that no more bleach is in your system.

Sometimes you need to leave it to a professional. You will need to contact a plumber if the problem is your home plumbing system. They will figure out what needs to be replaced (hot water heater, pipes, or both in some instances).

If your concern is with your municipal water supply, you will need to contact officials in the government. That way, working together, you can figure out a safe source for drinking water until the problem is solved.

Is Rust in Your Water Dangerous?

Mostly, rust in your water is more of an aesthetic problem than a deadly one since many people consume iron daily. However, it’s always good to err on the side of caution, especially if you don’t know the source of your rust problem. In that case, it isn’t suggested to drink, bathe, cook or do laundry with contaminated water; i.e., anything that requires clean water.

1. What happens if you drink rust water?

Ans. Probably nothing. Rust water might taste and smell unpleasant, but it isn’t usually a health risk. In some cases, too much iron or rust is a problem, and big pieces of rust might cut you on the inside. In severe cases, iron poisoning can happen. It’s best if you avoid drinking it.

2. Does boiling water get rid of rust?

Ans.  Boiling water has been a long-known tradition of purifying contaminated water. The higher temperature eradicates bacteria and parasites that might occur. However, rust is not considered a living organism, so it can’t be destroyed by boiling water. You need to seek other ways to end your rust problem in your water supply.

3. Does discolored water happen more in the heat? Why?

Ans. More things happen during the spring and summer months that can change the water flow. Activities like water main cleaning, renewals, and connecting new ones can cause rest to appear in your home or water supply.

Despite a humble beginning at a childcare facility, David sored to success due to his inextinguishable desire for learning and a rare self-motivational disposition. The day he received his appointment letter from LANE ENGINEERING CONSULTING, P.C. was the happiest day of his life. He was trained in plumbing and fire protection systems. The firm taught him the fundamentals of waterproofing, facade restoration, mechanical and structural plumbing. His profound and innovative plumbing knowledge sets our research guidelines. He’s currently working on his new book titled “Plumbing Essentials.”