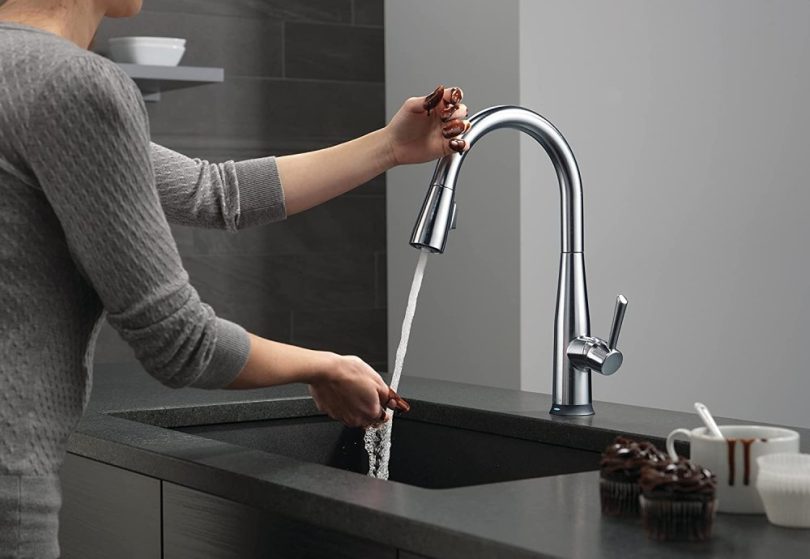 If you’re wondering about it, you surely have a curious mind because not everyone spends time studying about the functioning process of touch faucets!

No matter what, we’re here to feed your curiosity.

The sensor sends a motion signal to the valve so the faucet activates.

The device informs the valve when to start or stop based on the presence of any movement. It uses ultrasonic energy or infrared light to detect the movement.

Infrared sensors are often positioned at the lip or the base of the spout that allows them to detect motion with no obstacle from large items.

The solenoid valve is an electromagnet that pushes or pulls depending on electric polarity. The diaphragm valves have a rubber-like disc that controls the water flow.

The valve doesn’t open until there’s a signal from the sensor, which indicates the presence of hands.

The solenoid pulls the valve open to allow water flow and pushes it closed when the sensor detects the absence of hands.

Some touch faucets allow you to plug into a wall outlet to run.

You can plug your faucet into the outlet if you have a garbage disposal.

Install a new outlet close by or under the sink if you don’t have one.

Faucets that run on batteries generally cost less to buy but you need to factor in the frequency of battery changes and their cost.

You may need to change the batteries multiple times a month depending on how often you use the faucet.

Consider rechargeable batteries for your battery operated faucet to save money in the long run.

The force of running water powers the faucet by spinning a turbine to create electrical current.

The generated power recharges a backup battery and operates the faucet so the frequency of battery changes significantly reduces.

The system is so effective that you don’t need a backup battery to run the faucet in a busy restroom.

Artificial light or sunlight moves through a sensor and is converted into electrical energy.

Most solar faucets still need a battery-powered backup source. The battery power consumption level is dependent on light conditions and use frequencies.

The faucet mainly depends on light to run so you don’t have to replace the batteries often.

The spout is the central component of a touchless faucet that contains other working parts.

Variety of materials are used to make the spout but the most common one is zinc. The material is cheaper than other counterparts, which allows to keep the production cost down.

High-end models are made of copper or brass but some are also coated with chromium or nickel to increase durability and appearance.

How Do Touch Faucets Work?

The mechanism that runs the device is called capacitive technology which has a sensor at the core.

The sensor is aimed to detect any change in the capacitance. It requires electric power to measure the precise spike or drop in the conducive air.

The working principle is similar to your other touch gadgets. The only exception here is capacitance, which is a form of electricity with a measuring unit called “Farads.”

Your body generates a small quantity of capacitance. The sensors calculate the value of the charge and assess the difference.

The capacitance value increases high enough for the sensor to detect when in close contact so the water flow starts.

The value of capacitance drops when you move away the hands or touch the handle for a second time. This makes the water flow to stop.

The sensor is attached to the metal body of the faucet. Metal is a terrific conductor of electricity so the signal is easily picked up and transferred to the valve that later opens up to facilitate waterflow.

Different brands come with different features for their motion-sensor faucets but sometimes they give fancy proprietary names to industry standard features.

A good example is the “Spot Resist” technology that actually refers to spot-resist finish. There are motion activated faucets that include magnetic dockings for pull-down spray heads.

Brands come up with buzzwords to promote these options but your job is to focus on core features to find the right product.

Faucets that are easy to switch to manual are more practical than others.

The feature lets you use the faucet even when there are problems with the power source or the sensor.

Some faucet models allow you to conveniently change water temperature or raise the flow rate.

The advantage of these features is that you can use cold water to cook and warm water to clean in an instant.

Modern units let you do adjustments with either a faucet handle or a control dial below the sink but the newest models feature a sensor on both sides that controls the temperature.

They have a red and blue LED light that indicates cold and hot water controls.

Is it safe the way touch faucets work?

You may have concerns about electricity getting introduced into the bathroom or kitchen sink but the truth is many of them run on batteries that are not harmful.

You only need a Phillips-head screwdriver to change the batteries while other models are hardwired to the power source.

The pipes used for the water are non-conductive and the electricity has separate housing with decent insulation. There is no risk of electrocution when you have a correctly installed motion-sensor faucet.

1. Could my cat turn on a touch faucet?

It is possible for your cat to turn on touch faucets but they come with a built-in timer. They will automatically turn off after a few minutes of inactivity.

2. How do I reset my touch faucet?

Wait 30 seconds after you remove batteries from the pack. This will reset your faucet.

3. Why does my touch faucet have low water pressure?

Clogged cartridge and blocked aerator are two most common causes for low water pressure in your touch faucet. These problems are found in other types of units including commercial kitchen and pull-out faucets.